What is Osgood Schlatters Disease?

Osgood Schlatter’s Disease is typically suffered by active sporty children, read about it’s origin here. It can be extremely painful and debilitating, often causing them to stop playing sport, and can even affect their everyday life activities such as walking to school, climbing stairs and even sitting down from standing.  No active child wants to stop playing and participating in their sports which can lead to further pain and frustration. Osgood Schlatters Disease is in essence, a sports-related overuse injury in adolescents.

Medical conditions were traditionally named after the doctors who first described them and Osgood Schlatter’s Disease came from two doctors: Dr. Osgood and Dr. Schlatter. They called it a disease over a century ago in 1903. So the condition was named after them and the word ‘disease’ has stuck too until this day.

Robert Osgood was a US orthopaedic surgeon who lived from 1873 to 1956. born in Massachusetts US. He received his undergraduate degree from Amherst College in 1895, and M.D. from Harvard Medical School in 1899. After graduating and working at the House of the Good Samaritan, which was devoted to the care of patients with chronic diseases, Dr. Osgood began a surgical internship at the Massachusetts General Hospital. Later, he served at the Boston Children’s hospital  at which time he discovered the growth and traumatic disturbances of the tibial tubercle (the bony protrusion below the knee) during adolescence.

Carl B. Schlatter was a Swiss surgeon who lived from 1864 to 1934. He received his education from the universities of Zurich, Heidelberg, Vienna, and Paris. He graduated as a Doctor of Medicine at the University of Zurich in 1889. In the winter of 1889 to 1890 he studied in Vienna with Christian Albert Theodore Billroth and Eduard Albert (1841-1900). He was invited by professor Rudolph Ulrich Krönlein (1847-1910) to join him at the university clinic in Zurich, where he was habilitated for surgery in 1895. He became ausserordentlicher professor of surgery and casualty medicine in 1899, and in 1924 was made full professor of this discipline.

The language of orthopedics often credits the original describers or those who popularized a disease process by attaching their names to the disease process in question. These so-called “eponyms” have become quite commonplace in our literature and offer important orthopaedic historical insight. Often throughout history, the simultaneous discovery of a disorder is described by two independent researchers, resulting in a hyphenated eponym.

Similar conditions such as Sever’s disease and Sinding-Larsen-Johannsen Disease follow the same naming formulae. These conditions also follow a similar pattern of cause and presentation but occur in other tendon attachments or different places. For example: Sinding-Larsen-Johanssen disease in the patella (kneecap), Sever’s disease in the heel. There are others which are named either after the actual pathology including Apophysitis of the hip and also the sport where it occurs commonly which Little Leaguer’s elbow. Is an example of. See our Osgood Schlatters Disease glossary for more information

In most instances children are affected as they go through their secondary growth spurts. This usually occurs in their early teens. The most common age for Osgood Schlatters Disease is between 12 and 14 years old. There is a ratio of boys to girls  at 2:1, who get it  but this may reflect the types of sport or activity played rather than a difference in gender . It is much more common in those young athletes who play lots of sport.  Studies have shown that the incidence rate may be as high as 30%.  High levels of sport involvement e.g. more than 12 hrs of organised sport per week, and also certain sports are factors which can increase the chances of getting it.

The onset of the condition is ALWAYS associated with this adolescent growth stage, although some patients can continue to suffer from the symptoms well into adulthood.

Once the child has got Osgood Schlatters Disease, there is a tendency to keep recurring until full skeletal maturity occurs and that can take years. The average time for someone to be actually suffering the pain of Osgood Schlatters Disease and limiting their sport is 21 months. Eventually the skeletal bone stops growing so fast and the epiphysis solidifies and hardens so the tendon attachment gets stronger and the condition resolves, but it often leaves a large and tender hard lump behind. Whilst this may not bother future sporting activities like running and kicking, it can cause problems with kneeling and squatting for the rest of their lives.

So although many books will tell you that Osgood Schlatters Disease is a ‘self-limiting’ condition that leaves little long term problems, most sufferer’s will tell you the opposite – that it severely affects their lives and can give rise to issues well into adulthood.

Osgood Schlatters Disease has even been documented in dogs and race horses. It is not just a human problem. No official studies have examined whether the animals suffering were adolescents or very active! 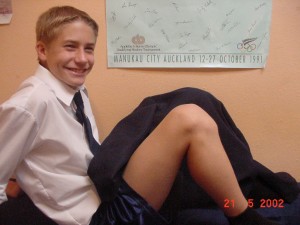 Osgood-Schlatter’s disease occurs when there is a pulling away of  the patella tendon from its bony attachment on the tibial tubercle with the prominence at the top and front of the tibia (shin bone). Alternatively known as ‘traction apophysitis’  as this describes the pulling away of the tendon from its soft bony attachment. The bone area is still soft because it is also the site of a child’s growth plate,  and cartilage is in the process of turning slowly to bone as the child grows through their puberty stage.

This soft site is called the epiphysis and the tendon attachment area is called the ‘apophysis’. The word ‘apophysitis’ just means inflammation (-itis) of the apophysis.

Although it is often linked to high levels of sporting activity with higher than normal levels of intensity or engagement, it can also occur in  some children who don’t do a lot of sport but may be growing at a more rapid rate that average.

As explained above the condition has been around since 1903, and there has been no research published to date looking at the causes. There have been numerous studies which describe patients who had it.

Some factors are common though. For instance, it is rare it occurring in:

Intensity of sport or physical activity is thought to be a factor – a rapid increase in muscle strength/girth could place too much strain on the the apophysis (tendon attachment zone) . Those who participate in sports that rely on powerful contractions of the quadriceps muscle which is attached to the patella tendon and that accentuate kicking, sprinting or jumping  and swift changes of  direction  appear to have higher incidences of  Osgood Schlatter’s Disease. These sports include football/soccer, netball, tennis, basketball,  gymnastics, figure skating and ballet.

Another area of interest to researchers is the growth rate of these youngsters. It may be an important factor to look at as there is often a genetic incidence which is most likely to be related to growth rate patterns. This is not related to the type or intensity of sport played.

And related to this growth rate is an apparent reduction of muscle flexibility. This too may have an important part to play as tight muscles will cause more traction pull on the tendon.

Poor biomechanics could be involved as incorrect alignment of the joint will place abnormal loads on the tendon and with repeated use could cause an overuse-type injury or pathology.

The first symptom of Osgood Schlatters Disease is usually pain after activity The child will point to the area and as the condition gets worse it is characterised by a swollen and tender lump forming at the top of the shin (tibia), which is below the front of the knee. Whilst there is a lump there anyway, called the tibial tubercle, when a child has  Osgood Schlatters Disease the lump is enlarged, swollen and very tender to touch.

Movements of the knee can be painful, and powerful ballistic actions such as jumping, running and kicking, will be difficult if not impossible.  Other early signs are that your child’s style of running changes and they may even limp after activity.

Flexibility of the thigh muscles is often reduced (tight) as well and ability to squat is affected and reduced by knee pain.

Usually, clinical examination is all that is required as the enlarged lump and ‘Ouch’ reaction of the patient is indicative of the condition. The age of the patient and history of the problem must match the classic group as highlighted above.

It is important to note that  there are some more serious conditions such as infection or tumours that may need to be excluded.

For this reason parents of children with knee pain should always get a diagnosis for this condition from a qualified health practitioner such as a Medical Doctor or Physiotherapist.

Medical imaging tests may be needed to diagnose the condition and its staging (severity) accurately.

X-rays have been traditionally used and show a clear separation of fragments of the tibial tubercle as seen to the right.

Ultra-sound scans can also show the level of tendon inflammation and as these are less dangerous for using around growth plates on children,. They are often preferred to X-rays.

MRI scans show both of the above but are more expensive and time consuming to perform. CT scans can also be very informative but these are not as easily available. See picture upper right.

SPORTS SUPERSTARS WHO HAVE HAD OSGOOD SCHLATTERs

UK Footballers Paul Scholes and Steven Gerrard suffered Osgood Schlatters Disease and went on to play premiership football and have both played for England.

Gaël Monfils is a French professional tennis player. He has reached a career-high singles ranking of World number 7. He is currently the third highest-ranked French tennis player – 14th in the ATP World Rankings

An up and coming member of the England rugby revolution, Ben Morgan also suffered the condition in his youth.

Daniel Welbeck was diagnosed with Osgood Schlatter disease in his youth, leaving him with excruciating pain and swelling in his knees. Doctors warned he should consider quitting soccer, claiming that continuing to train and play several times a week could cause ongoing pain and growth complications. He was part of City’s youth training program as a youngster but was not considered to have the potential to become a professional and was told not to return for future training sessions. A few months later a MUFC talent scout spotted Welbeck and he went on to become a Manchester United player . More recently he played for England in the Euro 2012.