Sever’s is from the same family of apophysitis conditions as Osgood-Schlatter’s and Sinding-Larsen-Johanssen. It therefore has a similar aetiology (cause) which is related to growth spurts and affects mainly athletic kids. The most common age group appears to be slightly younger than for OSD with the average age between 10-11 years.

It was first written about by Dr J.W. Sever in 1912 and thus the condition was named after him.

Again it is not a ‘disease’ but a syndrome that affects the tendon attachment of the Achilles – at the back of the calcaneus (heel bone).

It is exacerbated by activities in which the calf muscles predominate e.g. jumping, lunging and running, so we see it affecting youngsters especially in sports such as basketball, netball, dance, gymnastics, and martial arts. Other popular sports which have an intensive training schedule such as football (soccer) and tennis are also seen frequently.

The symptoms are pain and exquisite tenderness at the back of the heel, which is made worse with exercise. Like Osgood-Schlatter’s, Severs tends to wax and wane according to activity levels but if the traditional conservative approach of RICE is taken, the average resolution takes around 2 years – once the child has stopped growing. 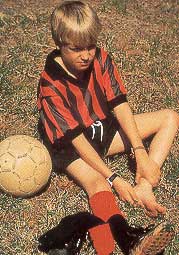 In the meantime their sports and even daily physical activities can be severely compromised by pain and a feeling of weakness. Some Severs patients will find it impossible to return to their sport for many months and this can even mean losing their places in training squads and sports academies. It can be a very upsetting experience especially as most health professionals offer little hope except advice to ‘wait and grow out of it’.

They aren’t necessarily aware of the latest developments of more successful approaches such as ‘The Strickland Protocol’. The scientific study behind this treatment showed a pain free return to sport in an average of only 17 days, allowing patients to return to their normal lives in a drastically shorter time than is usually advised. VIEW CLINICAL TRIAL HERE.

It follows a similar approach to Jenny Strickland’s treatment for Osgood-Schlatter’s disease which has seen hundreds of happy kids and parents from around the world report that their child is completely cured and back playing the sports they love.