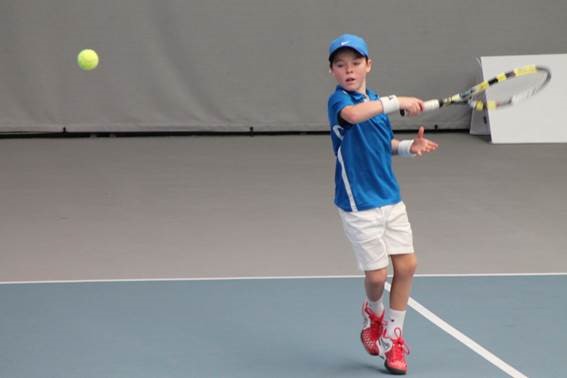 Thanks for your note and support.

Let me tell you about my son’s situation and provide feedback on the Protocol. Our youngest son, Sebastian, recently turned 10. He’s a promising junior tennis player here in New Zealand and had been suffering with a knee problem on and off for a few months. Here’s a photo of him in action:

After a few sessions with a physio, Osgood-Schlatters was suspected. Sebastian was referred to see an orthopaedic surgeon who confirmed the suspected diagnosis. We were advised that the condition could impact Sebastian’s sport for some months. We didn’t want to accept a ‘wait and see’ approach so I did some research on the internet and came across your site. I was skeptical as there was a fee to pay and, as a consumer, you’re uncertain whether it is real or a scam.

Fortunately, our physio contacted you and, based upon your response to her, gave us the confidence to go ahead and buy the Protocol, which we did on 6th August. Our first reaction was that it seemed almost too simple, but we went ahead in hope and set up a new regime for Sebastian. He did well to constrain his activity, as he’s a very active and bouncy boy that likes to be on the go.

We implemented the morning treatment and patiently waited to see whether there would be any effect.
The speed of his recovery has been a revelation. On 24th August, he was back on court having an initial gentle hit. That’s only 18 days after starting the Protocol. Today, 7 days on, he was back attending tennis coaching. He’s been active at school as normal all week and he’s bouncing around on our trampoline. He’s doing all this totally pain free in his knee.
We’ve decided to stick with the daily treatment and he’s doing his stretches, which is building up good disciplines for him. He’s wearing a jumper’s knee strap to give him a little extra support. He’s now training for his next tennis tournament at the beginning of October and we’re hopeful he’ll be ready to  ready to compete and enjoy not having any problems with his knee.
Well done on developing the Strickland Protocol. It’s had a fantastic result for Sebastian and I’d highly recommend it.

Thanks and regards
Stephen Lawrence
NZ